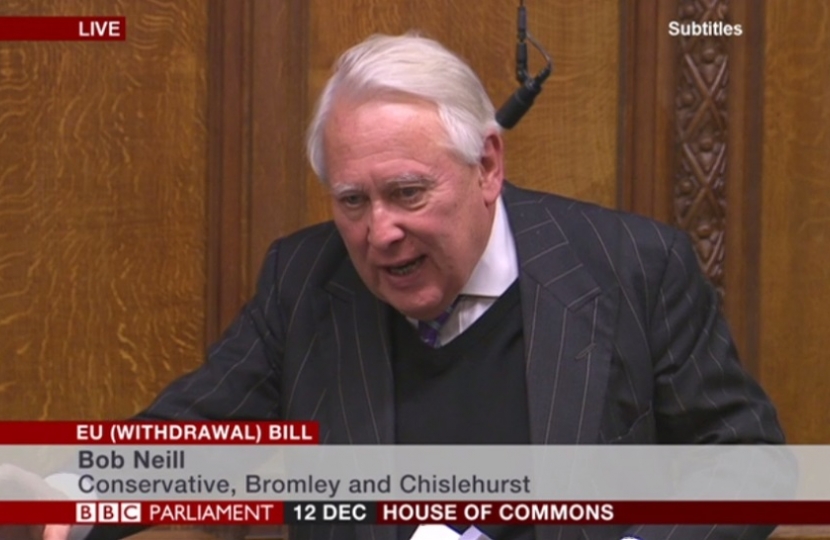 Following the regular updates I have been posting on my website, I wanted to tell residents why I voted against the Government last night, supporting Amendment 7 of the EU (Withdrawal) Bill, moved by my Conservative colleague Dominic Grieve QC, the former Attorney General.

It is not something I did lightly. I have been an active member of the Conservative Party for nearly 50 years, during which time I have led the Conservative Group on the London Assembly, twice served as a Vice Chairman of the Party, and held positions on the frontbench, both in Opposition and in Government. Throughout all that time, I have only voted against my Party twice (which is considerably fewer times than a number of my senior colleagues currently serving in the Cabinet). Any accusations of disloyalty are therefore totally misplaced.

On both occasions, in February and last night, I have voted for Parliament to have a meaningful vote on the final Brexit deal. That does not stop Brexit, it certainly doesn’t halt or hinder it, and it does not undermine the Prime Minister’s negotiating hand. It simply enshrines in law what the Government has promised MPs already – a meaningful vote on the terms of our departure, just like the European Parliament will have. That will allow us to fully and properly scrutinise this process, as good Parliamentarians should do.

I have endeavoured to work constructively with the Government so that it can achieve an orderly withdrawal from the EU. Indeed, I have had many positive meetings on the other amendments I have tabled in my name – which are especially concerned with protecting the financial and professional services sector, which is so important to residents in Bromley and Chislehurst – as well as on the broader amendments a number of my colleagues have laid which are designed to uphold Parliament’s sovereignty, ensuring this legislation is legally and constitutionally fit for purpose. My speeches in the Commons during the course of this Bill will attest to that. These are all available online, including my contribution in Tuesday’s debate:

This amendment boils down to one fundamental principle: the sovereignty of Parliament. We live in a Parliamentary democracy, which means it is Parliament that must ultimately approve or reject the final deal. It is my job, as your MP, to scrutinise, and where necessary, amend, Government legislation. Given the importance of this Bill, we must examine it with particular care. That is what I am doing, no more, no less. Those who suggest it is somehow “undemocratic”, or even “traitorous”, to amend the legislation, even while supporting its general direction, frankly do not understand how a Parliamentary democracy works.

As I have already made very clear, I respect the result of the Referendum. That is why I voted to trigger Article 50 at both the Second and Third Reading of the EU (Notification of Withdrawal) Act earlier this year, and supported the EU (Withdrawal) Bill at its Second Reading in September. It is why I have also supported the Government in every other vote on this Bill to date. The Article 50 process already sets our withdrawal date as 29 March 2019.

However, an MP is a representative, not a delegate, and I am elected to Parliament to act in the best interests of all of my constituents, not to blindly push through bad or faulty legislation. Bromley and Chislehurst voted 25,213 for remain and 25,041 for leave. That can fairly be described as a virtual dead heat, but a "vote for Brexit" it demonstrably is not.

Neither was there anything on the Referendum ballot paper about the sort of Brexit we negotiate, or what our future relationship with the EU27 should be. That is where Parliament must use its collective judgement.

The outcome of last night’s vote on this one particular issue will not derail Brexit (nor do I want it to), and it will not strengthen a left-wing, anti-business Corbyn government. This was an amendment tabled by Conservative MPs, which Opposition Parties supported.

The Prime Minister has my full support in delivering the pragmatic Brexit she outlined in her Florence speech in September, something I made clear during her statement in the Commons on Monday. I will continue to work with my Ministerial colleagues to secure a deal that delivers the promises this Government has made, protects our economy, as well as jobs in our constituency and across the UK, and keeps Britain an open, outward looking nation.