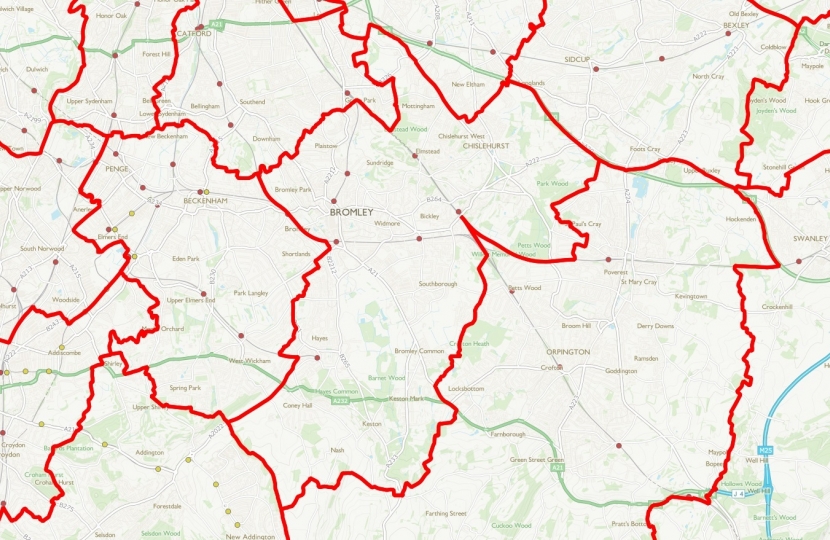 As you may have seen on the news, the Boundary Commission has recently released its proposals for the 2018 Boundary Review. A number of residents have contacted me asking what this means for Bromley and Chislehurst and how it will effect the constituency.

The Boundary Commission – an independent and impartial advisory non-departmental public body - is responsible for determining the boundaries that define the geographical area an MP represents. It is required by the Parliamentary Constituencies Act 1986 to review the Parliamentary constituencies in the UK every five years, and although Parliament can choose to approve or reject these recommendations, it is not allowed to amend them. Specifically this time round, the Boundary Commission has been tasked with reducing the number of seats in Parliament from 650 to 600, cutting the cost of politics.

Revising constituency boundaries on a regular basis is necessary to reflect changes in demographics, house building and migration. Currently, constituencies range in size from 21,000 to 108,000 electors. Indeed, the difference in size between the total number of voters in the largest 20 seats in England compared to the 20 smallest is 541,056, similar to the population of Cornwall! That is clearly bad for representative democracy. The new quota proposed by the Boundary Commission would mean that all constituencies will have an electorate of somewhere between 71,031 and 78,507. Further details can be found here:

If approved, the proposals put forward by the Commission will mean changes to the Bromley and Chislehurst constituency. Ultimately, the boundaries will be very similar to what they were before 2007, with Bromley and Chislehurst losing the Cray Valley West ward to Orpington, and gaining the wards of Hayes and Coney Hall and Bromley Common and Keston from the Beckenham constituency. A map of the proposed boundaries in the Borough can be seen above.

We have now entered a consultation period, which will be open for twelve weeks, and there will be a number of public hearings throughout October and November. In fact, two hearings will be held at the United Reform Church in Bromley on 20 and 21 October. I plan to speak at the first of these and you can register your interest in sharing your views on one of those dates through the link below:

You can also respond to the consultation in writing here:

This will then lead to two further public consultations before the final proposals are submitted to Parliament and put in place by the end of 2018, ensuring people have enough time to familiarise themselves with the new constituency boundaries before the next general election. If you have any queries about this process, please do not hesitate to get in touch.