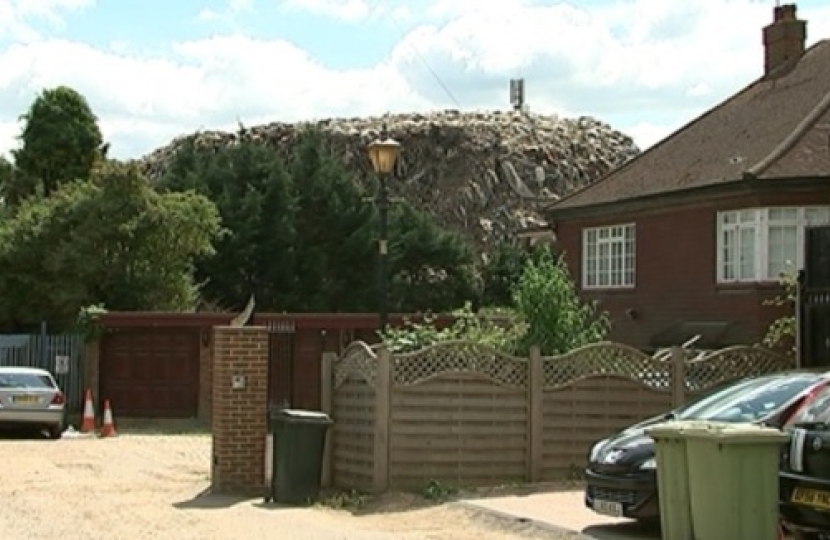 As you may have seen on the local news in recent days, an agreement has been reached to clear the terrible rubbish mound at the Waste 4 Fuel site on Cornwall Drive, something that has blighted the community for a number of years.

This fantastic news comes at the end of what has been a painstaking process, requiring countless meetings and negotiations between Bromley Council, the Environment Agency (EA), local residents – including those involved with the CRA20ten Association – and the landowner of the site, brokered by the three local Members of Parliament: James Brokenshire, Jo Johnson and myself.

From the beginning, this problem was brought to the attention of those at the very highest level, including the then Prime Minister and Mayor of London, as well as their officials at both No. 10 and City Hall. We were also able to organise a series of meetings with the former Environment Secretary, Liz Truss, from which we were able to secure extra funding to reflect the exceptional nature of this case, making the deal possible.

The problems we have faced have been unique in so far that Waste 4 Fuel Ltd were not operating under normal planning permission, but rather a Certificate of Lawful Use, granted by the High Court many years ago, making it extremely difficult to change the use of the land without owning it. This has been exacerbated by a number of other factors – especially the difficulty the EA have faced in identifying the true operators of the site behind a shell of companies - complicating any further legal action that may have otherwise been sought. We have been determined to ensure in a legally watertight way that the site will not be used as a waste centre again, which is precisely why it has taken time to gain possession of the land.

I appreciate how frustrating this situation has been to all those involved, but especially those neighbouring the site who have had to endure the most awful of conditions. Over the three years my colleagues and I have been working on this case, every possible route to clear the waste and pursue those responsible has been investigated, from a legal perspective, from a central government perspective, and through the powers available to the local authority. It has come as a great frustration to us that, given the sensitive and ongoing nature of many of the negotiations, we have been unable to always provide local residents with a full insight into the efforts that have been made behind the scenes.

Nevertheless, persistence seems to finally be paying off, terms have been agreed by the parties, and the deal will now be considered at an Executive meeting of the Council on Friday morning. Clearly there is still more work to do, but there is light at the end of the tunnel. The main priority will be to get the site under control and cleared as a matter of urgency, but I will also continue to fully support the Council and the EA to pursue those responsible, and ultimately, recoup as much of the costs they have generated as possible.

This represents an important and positive step in the right direction, and I hope it is one that will reassure long-suffering residents that progress is being made. A full press release can be read through the link below, as can the agenda for the Executive meeting: