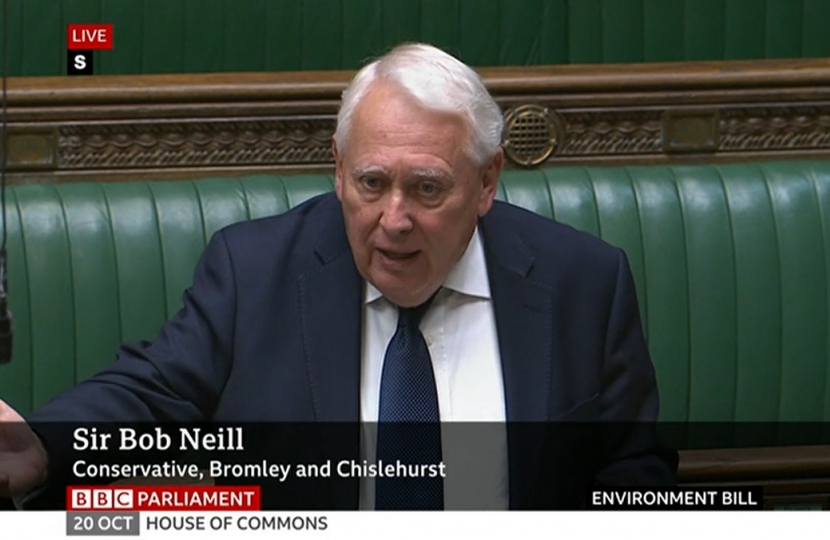 A number of residents have contacted me over the weekend concerned about the Environment Bill and a vote that took place last Wednesday on Lords’ Amendment 45 on storm overflows. It is disappointing that there has been so much misreporting on this amendment and to provide both clarity and reassurance I think it is important to set out in some detail the facts.

Sewage discharges from storm overflows are a major problem, with their use increasing in recent years due to both greater levels of rainfall in the UK and as a result of our ageing water infrastructure, which hasn’t kept pace with the growth in population. This is a problem I have raised multiple times with Thames Water, and earlier this year I supported a Private Members’ Bill, tabled by my colleague, and the Chair of Parliament’s Environmental Audit Committee, Philip Dunne, which sought to significantly tighten up the regulation of water companies - the Sewage (Inland Waters) Bill. Unfortunately, the Bill didn’t complete its passage through Parliament before the end of the session, so it did not become law, but large parts of it were taken on by the Government and included in the Environment Bill we were debating last Wednesday.

The Bill introduces a number of measures to help tackle storm overflows. That includes:

Separate from the Bill, the Government is also making it unequivocally clear in a policy statement to the water regulator, Ofwat, that water companies must take steps to “significantly reduce storm overflows”, incentivising a reduction in the frequency and volume of sewage discharges. This builds on the work already being undertaken by the Storm Overflows Taskforce, which was set up in September 2020 and brings together government, the water industry, regulators and environmental NGOs to accelerate progress in this area.

Section 141A of Amendment 45, tabled in the House of Lords by the Duke of Wellington, proposed a complete ban on all storm overflows. While that is very laudable, and in an ideal world would be something I am sure the large majority would support, it was accompanied with no plan of how we go about doing that, and no assessment on the impact it would have on bill payers. Our sewage system dates to the Victorian era and the cost of upgrading it to the extent where no overflows would be necessary has been estimated to be anywhere between £150 billion and £650 billion. To put that into context, £150 billion is more than the entire schools, policing and defence budgets put together, and £650 billion is more than the entire package spent so far on tackling COVID-19. These are significant sums of money, and while I entirely share people’s desire to clamp down on the use of storm overflows, without further analysis on what it would mean for bill payers, supporting this part of the amendment would, in effect, have resulted in all of us signing a blank cheque.

Moreover, it is important to bear in mind that there aren’t just financial implications to such decisions, but practical ones too. Until we have the infrastructure in place whereby storm overflows are no longer required, sewage discharges will, regrettably, still be needed when there is extremely heavy rainfall. These overflows are there to prevent the sewers from backing up, and while no one wants diluted sewage released into our waterways, the alternative, were we to ban them outright, would see an increased risk of the sewers flooding out on to streets. That is the reality, and I hope explains why I voted against Section 141A. In doing so, the House of Commons omitted seven lines, from a Bill that altogether is over 270 pages long.

I should stress that I voted for the remainder of Amendment 45 which, among other things, places a legal duty on the Government to reduce storm overflows and publish a plan by 1st September on how it will do so. Of course, this must be an ambitious and rigorous strategy, but importantly, one that is phased to ensure the infrastructure isn’t overwhelmed by the sort of sudden, knee-jerk reaction Section 141A proposed. Given the other measures I have set out above, the accusation, which has sadly spread online, that I and my colleagues have somehow given a green light to the dumping of sewage into our rivers is wholly inaccurate and demonstrably false. Quite the opposite is true.

Indeed, I have repeatedly taken this issue up with both Thames Water and the Government, and have pressed the Environment Agency on a number of specific areas of concern related to the River Cray since being elected to Parliament in 2006. I need no persuading that we need to do much more to protect our environment, and go a lot faster, but improvements will take time. I believe it is important that politicians are upfront and honest that they will cost too. Whether that be upgrading our sewage system, increasing the use of renewables, modernising farming practices or reducing waste in the fashion industry, progress will require sacrifices from us all, be that in terms of how much we pay for services or in our habits and lifestyle choices.

For that reason, it is of the upmost importance that we are able to have a well-informed, mature and robust public discussion about how we go about securing the change all of us want to see. Disagreements will be inevitable, but debate should be pursued in the knowledge that the overwhelming majority of us, whatever our political beliefs, have the same end goal in mind: a cleaner and greener society for our children and the protection of our planet. Jumping to conclusions, without the facts, and based on a few misleading headlines – as we have seen in recent days - undermines those efforts and simply perpetuates malice and mistrust in politics and the ability of the democratic process to do good at all levels.

It has been estimated that pollution cuts an average of two years from the lives of the global population, rising to six years in some of the most highly polluted nations, killing seven million people around the world every year.