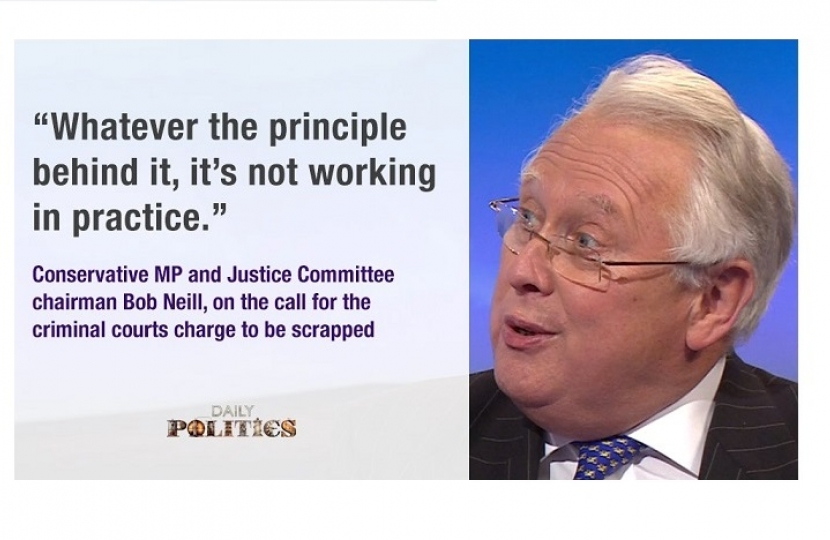 This morning the Justice Select Committee, of which I am the Chairman, published a report calling on the Government to scrap the criminal courts charge. By way of background, the charge was introduced earlier this year through the Criminal Justice and Courts Act, imposing a mandatory charge on offenders convicted of a criminal offence to help cover the ‘relevant court costs’ of proceedings.

In short, it means convicted criminals in England and Wales have to pay a charge of between £150 and £1,200 towards the cost of their case, on top of fines, compensation orders and defendants’ own legal charges. The fee, which is not means-tested, is also higher for those convicted after having pleaded not guilty.

Our work on the court charge is part of a wider Justice Committee inquiry into courts and tribunal fees and charges, announced on 21 July. However, having taken evidence from a range of witnesses and industry experts, all of whom, bar the Ministry of Justice (MoJ), raised serious concerns about the impact of the charge, it was decided to bring the findings and recommendations of this part of the report forward as soon as possible.

From the evidence we have received, the Committee has grave misgivings about the operation of the charge and whether, as currently framed, it is compatible with the principles of justice. We conclude that in many cases it is grossly disproportionate, it fetters judicial discretion, and creates perverse incentives – not only for defendants to plead guilty but for sentencers to reduce awards of compensation and prosecution costs. We also do not believe that it will raise the revenue the Government predicts it will.

As a Committee, we have therefore recommended that the Ministry of Justice brings forward legislation to abolish the court charge as soon as possible, and at the very least, call for a double discretion to be given to sentencers. First, to decide whether to impose a criminal courts charge, and second, to decide the amount of the charge dependent on the circumstances of individual cases. I have attached the Committee’s report in full at the bottom of this page.

Our recommendations have gained comprehensive coverage in today’s press, and I hope, when taken together with the evidence set out in the Committee’s report, the Government will seriously reconsider the future of this policy.