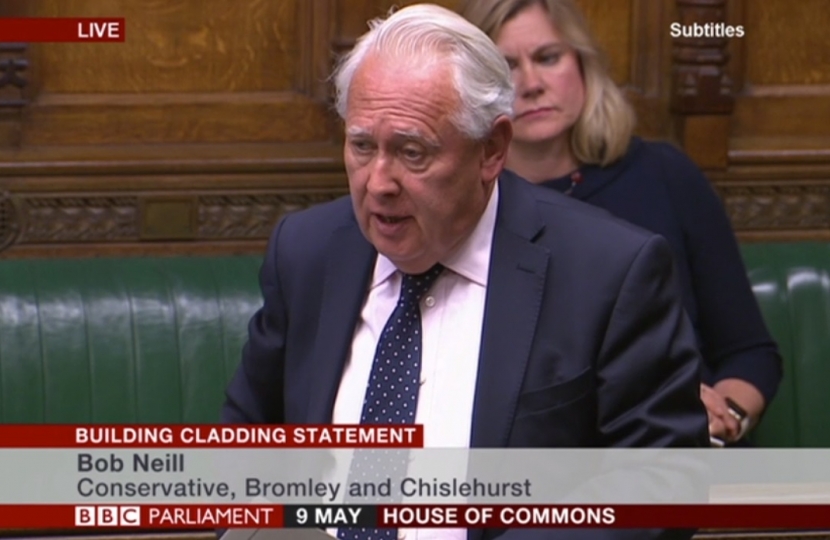 I am delighted by today’s announcement that around £200 million will be made available to overhaul dangerous cladding on privately owned residential tower blocks, like that at Northpoint in Bromley.

This has been a long-fought battle, with residents first bringing this complex case to my attention in March last year. Since then, I have persistently, and at the very highest levels, raised it with the Government, including with the Prime Minister, as well as with the building owner, Citistead, and the legacy developer, Taylor Wimpey.

Although a number of outstanding issues remain, this morning’s announcement is a significant step in the right direction, and one that stands testament to the hard work of everyone involved, not least the Northpoint residents. Indeed, from the Bromley Town ward councillors to my ministerial colleagues who have lobbied on this from within Government - and, of course, the flat owners themselves, who deserve this relief and have campaigned so hard – it has been a real team effort to get to where we are now.

In today’s statement, I pressed the Secretary of State, James Brokenshire, to confirm that this new fund will cover all cladding systems that include elements of Aluminium Composite Material (ACM), similar to that present at Northpoint. I was pleased to receive his assurances on this point, and will be studying the exact detail of the announcement once it is published:

It is regrettable that public money has had to be set aside in this way, but with many commercial freeholders dragging their feet and failing to act – and with no levers at its disposal to legally compel them to intervene – the Government has been forced to step in to ensure the safety of residents. That is morally the right thing to do, and in my opinion, is the only way to replace this dangerous, Grenfell-style cladding without forcing innocent leaseholders to bear the brunt of the considerable remedial costs.

My priority over the coming weeks will be to continue working with all the residents affected to bring any unresolved matters to a timely conclusion. That will involve keeping the pressure on the building owner to ensure this very welcome remedial fund is accessed as soon as possible, as well as addressing the internal compartmentalisation issues also present in the block. But for now, I hope today’s announcement will provide some peace of mind to the residents of Northpoint, not to mention everyone else who has got behind this campaign.

Further details of the announcement can be found in the Government’s press release here.

Directly or indirectly, either through a loss of service or as a result of disruption caused by repairs, most of us in Bromley and Chislehurst will have encountered problems with Thames Water at some point.