The Prime Minister’s statement on Syria 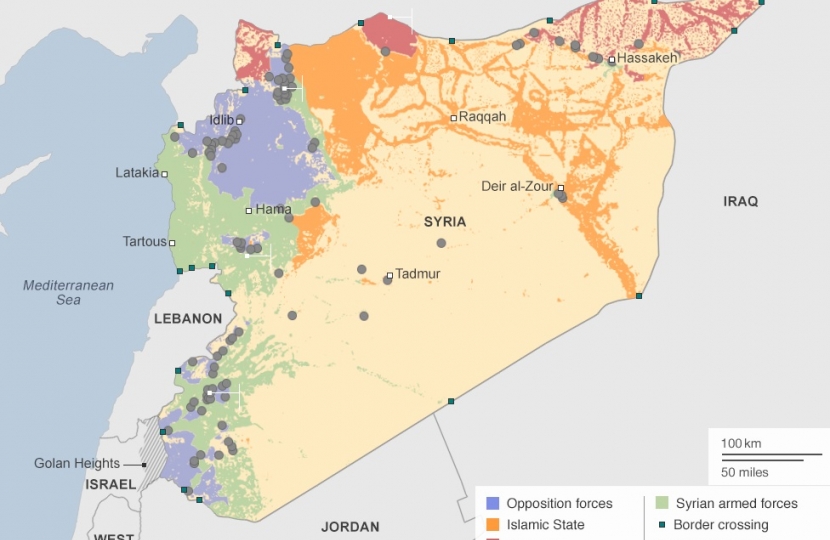 Yesterday, in response to the Foreign Affairs Select Committee’s report on British military operations in Syria, the Prime Minister put forward to Parliament a seven point strategy for tackling ISIL, recommending that we extend to Syria the targeted airstrikes we are currently carrying out in Iraq.

This is a decision we must of course take incredibly seriously, and I am very conscious of the opinions constituents have raised with me on both sides of the debate. Having considered the evidence in detail, I must say that I support the Prime Minister’s logic and find the argument he has put forward compelling.

A number of our closest allies are already involved in airstrikes against ISIL in Syria, including the US and France, and have called on Britain to play its part in helping to defeat ISIL, and the barbaric and toxic ideology it has spread, in its Syrian strongholds. There can be no doubt that the Government’s number one responsibility is to protect British civilians, and I believe we cannot forfeit this duty to our allies already engaged in the region. Indeed, I would go as far as to say that we have a moral responsibility to stand shoulder to shoulder with our allies in working together to defeat this terrible organisation.

I am acutely aware that any military action must have a strong legal grounding, and just last week the UN Security Council concluded that ISIL constitutes a ‘global and unprecedented threat to international peace and security’, calling on its Member States to take ‘all necessary measures’ to prevent and suppress terrorist acts committed by ISIL. In doing so, we would not be working alone. The Global Coalition to counter ISIL currently comprises of 63 states, including countries across the Middle East and North Africa – Saudi Arabia, Turkey, Jordan, the UAE, Lebanon, Kuwait, Qatar, Egypt, Oman, Bahrain and Morocco, to name just a few.

I am also mindful that we should not escalate our operations in a knee-jerk reaction, as some have put it, to the awful attacks on Paris a fortnight ago. This is absolutely true, but it should not negate from the very real and continued threat ISIL poses to Britain. In the last year alone, 7 ISIL related terrorist plots in the UK have been foiled, and in the year ending 31 March, there had been 299 arrests in the UK for terrorism-related offences, a 31% increase on the previous year. I do not accept that by involving ourselves further, Britain will be putting itself at greater risk to these sort of attacks in the future. The reality is that we are already a top target, and the only reason we have not been directly hit so far is thanks to the fantastic work our police and security services carry out on a daily basis.

Whilst the Government has been clear that airstrikes alone cannot win this battle, I believe there is enough evidence that shows the effectiveness of targeted airstrikes to legitimise their use. Coalition forces have already hit over 13,500 targets, and in doing so have helped local forces regain 30% of ISIL territory in Iraq. But it makes no sense to stop at an arbitrary border when ISIL operates in both countries, and indeed has its headquarters in Raqqa in Syria.

I understand the desire many people have expressed for Britain to take a diplomatic route, which is something I believe everyone would prefer, and agree on, if there were someone to negotiate with, but the map above demonstrates the reality of fragmented politics confronting the region. With the military technology Britain can contribute – unrivalled in terms of airstrikes by even the Americans – we can seriously disrupt ISIL, supporting local ground troops and cutting off ISIL’s supplies. Indeed, ISIL is, as it stands, still generating around $1.5 million every day from the oil it sells. These oil fields are primarily in northern Syria, and if we cut them off, we take away the source of funding that allows ISIL to carry out these attacks.

The precision of our airstrikes should not be underestimated. The technology our military has at its disposal makes it possible to target vehicles, buildings, and even individual rooms in tower blocks with no collateral damage. It is also important to stress that there have been no civilian casualties as a result of our airstrikes in Iraq. Indeed, we must remember that all the while ISIL are allowed to operate in this area, more and more innocent people will lose their lives and be subjected to the most terrible conditions. All in all, more than 11 million Syrians have been driven from their homes by ISIL and President Assad, and the shocking images we all saw in the summer of refugees fleeing to Europe will only continue until this problem is addressed at source.

Clearly, there must be an end-goal, and I think many MPs would struggle to support such action without a robust transition plan for Syria. Building on the lessons of previous conflicts, we must work with our international partners – which we are doing through the newly created International Syria Support Group, as well as the Syria Conference the Prime Minister is hosting in February – to deliver an effective stabilisation and reconstruction programme that everyone in the international community is agreed on. The recent Vienna talks have set an aim for a transitional government to be in place in six months’ time, with elections and a new constitution for the whole of Syria organised, it is hoped, within eighteen months.

Further details of this can be found in the Prime Minister’s memorandum to the Foreign Affairs Select Committee, a copy of which can be read through the link below:

I believe we cannot be haunted into inaction by the mistakes of the past, which would also cost lives. The Government has approached this question sensibly, thoroughly, and with complete transparency to its logic. I have reached the conclusions I have made so far by looking at the need and the evidence, and will want to see the actual wording of the motion put forward, as well as further details of a post-conflict strategy for Syria, before committing my support. Ultimately, however, the Prime Minister has set out his case, and in principle, he has my support.