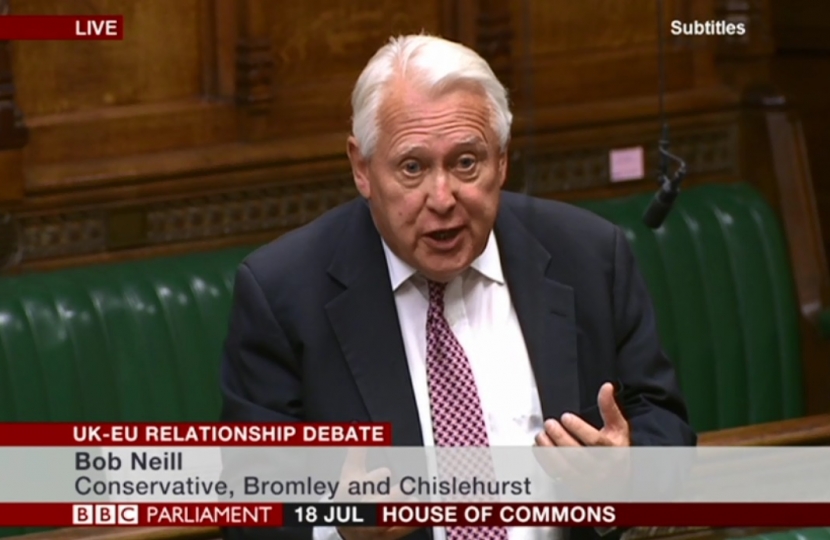 Following a number of significant votes last week on the Trade Bill and Taxation (Cross-Border Trade) Bill, I feel it is important, as ever, to explain to residents the reasoning behind my votes, as well as put right a number of falsities and areas of misunderstanding that have been raised with me.

I have always been very open and clear about my views on leaving the EU. Whilst I believe it to be a mistake, as a democrat, I respect the result of the Referendum and over the last two years have been wholly focussed on securing a departure that prioritises prosperity and jobs. As I wrote in my election address to every household in Bromley and Chislehurst last year: “I will fight for a pragmatic, business friendly Brexit that maintains the closest possible trading links with our friends and neighbours, as well as pursuing emerging opportunities in developing markets.” That is something I remain absolutely committed to.

I therefore very much welcomed the White Paper put forward by the Prime Minister earlier this month, which was signed off by the entire Cabinet at Chequers. The plan would ensure we are able to retain those close trading links with the EU - upon which millions of jobs rely, including those that support the tens of thousands of people living in Bromley and Chislehurst who are employed in the financial and professional services sector - whilst taking us out of the practical and legal structure of the EU and addressing the concerns that were voiced during the course of the Referendum.

This approach would make sure:

At the same time, it would create a business friendly customs model which, importantly, would not prevent us from being able to strike new trade deals around the world, and would protect the Union, ensuring there is no hard border between either Northern Ireland and Ireland, or Northern Ireland and the rest of Great Britain. It also proposes a new UK-EU free trade area for industrial goods and agricultural products, and would help maintain our close cooperation on security matters, as well as uphold strong employment, consumer and environmental rights.

As the Prime Minister said in her speech in Belfast last Friday: “Our job is not to deal with Brexit in theory, but to make a success of it in practice for all of our people.” Although not perfect, I believe this plan can achieve that, offering us a strategy, whether we supported Leave or Remain, a majority can unite behind. Indeed, it enjoys support from those of us who campaigned ardently to stay in the EU, as well as those who were on the opposite side of the debate. That includes prominent Leavers like Douglas Carswell, who left the Conservative Party in 2014 due to his strongly held views on Brexit, and Daniel Hannan, a highly experienced Conservative Member of the European Parliament.

Regrettably, a number of my colleagues have taken a different view, based not on an objective and forensic assessment of the plan laid out by the Prime Minister, but rooted instead in a misguided ideological puritanism that for them dictates the exact form Brexit must take. This dogmatic stubbornness, left unchecked, will drive us towards a hard Brexit, which let’s be clear, there is no mandate for. Whilst many of us have sought to work constructively with the Prime Minister, achieving a great deal as a result, some of my colleagues on the European Research Group (ERG) have chosen to undermine her position to pursue their narrow aims.

Last Monday, they tabled a series of amendments to the Taxation (Cross-Border Trade) Bill which were quite openly designed to wreck the Prime Minister’s Chequers plan. With threats of rebellion, and from some, letters of no confidence (something you will never find me writing!), she was forced to adopt these changes to ensure the Government did not fall.

With a number of colleagues, I therefore found myself in a farcical situation whereby I was being whipped to vote for something that, just half an hour before, ran completely contrary to Government policy. These are incredibly important decisions that will affect all of us. I am not prepared to support policy made on the hoof, nor will I vote for anything that I believe puts the livelihoods of my constituents at risk. That is why I voted against New Clause 36 and Amendment 73 of the Bill, which nevertheless passed.

Again, last Tuesday, I supported the Government on the majority of the votes that took place, voting with my Party on seven out of nine divisions. However, I voted in favour of New Clause 17, which was tabled by a number of colleagues (Conservative, Labour and SNP) who are medical doctors. The clause makes it a negotiating objective of the UK to remain part of the European medicines regulatory network partnership, something local doctors, as well as representatives from the pharmaceutical industry, have raised real concerns about. Essentially, the network ensures a smooth supply chain of the vital drugs our NHS relies on. I am pleased to say the amendment was passed.

I also voted for New Clause 18 of the Bill, which was tabled by my Conservative colleague Stephen Hammond. This would have made it a Government objective to secure a frictionless free trade area for goods with the EU, something entirely in keeping with the Chequers plan. Failing that, the clause would have ensured the Government seeks to enter a customs union (not the current Customs Union, and therefore not necessarily on the same terms) with the EU as an insurance policy to avoid a no deal Brexit. That is in full accordance with the Conservative Party Manifesto I stood upon last year, which committed explicitly to “seek a deep and special partnership [with the EU], including a comprehensive free trade and customs arrangement.” The amendment was rejected 307 votes to 301.

As I say, the Chequers plan is not perfect and needs some refinement, not least in relation to access to European markets for the critical financial and professional services sector, which is the greatest strength of our economy and supports the jobs of some 36% of Bromley and Chislehurst residents. However, it at least provides the foundations of something we can work with and take to Brussels. In principle, I would support any final deal based on it, and would strongly encourage others to read through it before making their own judgements or writing it off. It can be found in full here.

Working with the Prime Minister, not against her, I want us to secure a practical deal that supports businesses, protects jobs, and keeps us an open and vibrant country. Equally, it is in everyone’s interest that we deliver our promise of a clean and orderly departure from the EU. I remain absolutely committed to achieving all of those aims.