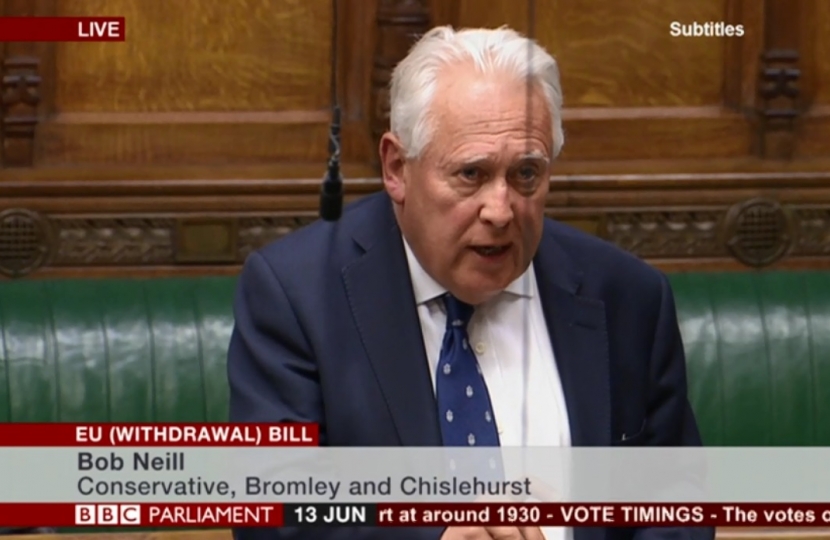 Now that the House of Commons is considering the Lords’ amendments to the EU (Withdrawal) Bill, I intend to post a series of detailed updates on my website to explain my rationale on particular votes as they arise, as I have endeavoured to do previously.

It is no secret that I campaigned hard for Britain to remain a member of the EU in the run-up to the Referendum. Since then, my position has been consistent and clear: like it or not, as a democrat I accept the result and will do whatever I can to help deliver an orderly Brexit that prioritises jobs and economic prosperity.

That is why I voted to trigger Article 50 at both the Second and Third Reading of the EU (Notification of Withdrawal) Act at the beginning of last year, and supported the EU (Withdrawal) Bill at its Second Reading in September, as well as at its Report stage and Third Reading on 16 and 17 January respectively. If I had wanted to thwart Brexit, as some have suggested, I would not have voted for the two pieces of legislation that enable it to take place.

However, just because Brexit was supported by a narrow majority of the electorate on 23 June 2016, it does not mean that the processes necessary to enact this decision should be immune, or somehow bypass, the usual legal and constitutional checks and balances that form the basis of our parliamentary democracy, in which Parliament is sovereign. In real terms, that means Parliament must have a meaningful vote on the final Brexit deal, just as the European Parliament will have.

This is something the Government has already promised, but that commitment must be explicitly enshrined in law and be sufficiently robust to ensure the Commons is able to properly scrutinise the deal and vote on it. A token gesture in which Parliament is offered an opportunity to simply rubber stamp the proposed terms of our departure is not good enough.

This is an important point of principle on which I have voted against the Government twice before, the only occasions in my entire parliamentary career in which I have defied the whip. I was reluctantly prepared to do so again with respect to Lords Amendment 19 on the same topic on Tuesday. However, after a number of constructive, face-to-face meetings with the Prime Minister during the course of the week, including on Tuesday itself, a workable compromise was reached which should ensure Parliament is given this meaningful say, without unreasonably tying the hands of the ministers negotiating for us.

Mature, sensible politics isn’t about big public showdowns or engineering opportunities to embarrass the Government. It’s about working together to find a solution. Unlike some MPs who wish to issue ultimatums and paint uncompromising redlines, I want to accommodate colleagues’ views and give the Prime Minister as much room to manoeuvre as possible to allow her to achieve a successful Brexit. That is what we have done.

The assurances we received from the Prime Minister, which were given and taken in good faith, are incredibly important. MPs - whose job it is to act in the best interests of all their constituents, not just those who voted with the majority – must be able to carefully look through what is on offer. I have known the Prime Minister for some 30 years; I like her and I trust her. She is pulling out every stop to get the best possible deal for the UK and our people, and I will back her in doing that. I believe she will succeed.

If, however, at the end of the negotiation period, a successful deal has not been reached and we are left with a Hobson’s choice – leave with whatever the EU offers us or on World Trade Organisation (WTO) terms, something many believe would be deeply damaging to our economy – Parliament should be able to vote on whether the deal is in Britain’s best interests. That is a sensible approach to take, and is not one that undermines our negotiating position or the broader withdrawal process.

I have also been very clear that I will not do anything that puts at risk the livelihoods and wellbeing of my constituents, 36% of whom are employed in the financial and professional services sector. Ultimately, economic stability is far more important than dogma, and our policies must be evidence driven rather than speculation based. Narrow, ideological stipulations about what Brexit should entail cannot be allowed to dictate the direction of our travel.

The Referendum offered voters a simple binary choice – ‘do we stay or do we leave?’ It did not, and, by its nature, could not, decide how we leave, on what terms, or what form our future relationship with the EU27 should take. On these issues I believe Parliament must use its collective judgement.

Throughout this process, I have pushed for a pragmatic, business friendly withdrawal that maintains the closest possible trading links with our friends and neighbours on the Continent, as well as actively pursues emerging opportunities in developing markets. It would though be remiss not to recognise that last year the EU accounted for 44% of all UK exports and 53% of all UK imports. Equally, it would be negligent to ignore the warnings and concerns raised by business experts and industry leaders. 80% of the UK economy comes from providing services, and the sector remains the UK’s largest source of tax revenue and largest driver of trade surpluses. Britain can, and should, aspire to be truly global, but that does not mean turning our backs on what we’ve already got.

That is why I believe we should consider all available options, including, but not limited to, remaining members of the European Economic Area (EEA) and negotiating some form of ‘customs arrangement’ (to adopt the wording used in last year’s Conservative Party Manifesto). I supported the Government’s own amendment on a customs arrangement this week on that basis.

Further details of the Government’s approach will be announced in its Brexit White Paper, which is due to be published over the coming weeks. I will be looking at its proposals closely and with an open mind.

My speech in yesterday’s debate can be read in full here.