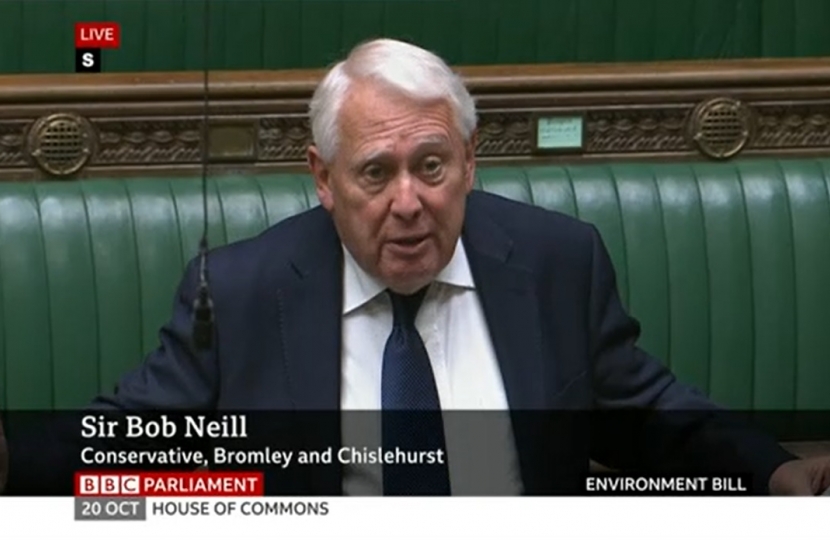 It has been estimated that pollution cuts an average of two years from the lives of the global population, rising to six years in some of the most highly polluted nations, killing seven million people around the world every year. In hotspots across the country, including parts of Bromley, poor air quality is directly affecting people’s health and I know, both from my conversations with local residents and the correspondence I receive, including recently on the Environment Bill, that taking action to curb this problem is a priority which is shared by many.

The Government has taken a proactive approach, adopting a Clean Air Strategy in 2019, described by the World Health Organisation (WHO) at the time “as an example for the rest of the world to follow”, and backing this up with significant funding, including on a specific nitrogen oxide programme (one of the top pollutants from car exhausts):

That is, course, welcome, but the need to do more, and at a greater pace, is clear to see, with far too many people still living in areas where the levels of toxic air pollution exceed legal limits. The tragic case of nine-year-old Ella Adoo-Kissi-Debrah, whose death in Lewisham in 2013 was found by the Coroner to have been materially impacted by air pollution, should be a wake up call for us all, especially in South London.

Since meeting with residents from Greener & Cleaner Bromley (& Beyond) and the Ravensbourne Valley Residents’ Association in 2019, I have been advocating that we sign up to WHO targets on particulate matter, otherwise known as PM2.5. I have previously been a signatory of amendments that would have put those targets into law, have raised this cause in numerous debates over the last two years, and have pressed for action closer to home in Bromley too. My response to the Council’s draft Air Quality Action Plan (AQAP) 2020-2025 is attached at the bottom of this page.

I remain committed to making tangible and significant improvements in this area, and was very sympathetic to Amendment 3 of the Environment Bill, which a number of constituents have recently raised with me. In effect, it would have set a legally binding target of reducing PM2.5 to 10 micrograms per cubic metre by 2030. The problem with that, however, is that the WHO just last month updated its guidance, for the first time in sixteen years, recommending that this figure now be halved to 5 micrograms per cubic metre. Given the recent change, the Government’s desire to be cautious about putting a number on the face of the Bill when the goalposts are in the process of moving and it is not yet clear exactly what will be required, or indeed how we go about achieving it, is, I believe, understandable. It is important we get this right, and the last thing anyone wants to do, including ministers - who from my meetings with them I am in no doubt are genuinely committed to making real progress - is set a legally binding target that is outdated before the legislation even comes into force. That is why I voted against the amendment.

There is already in the Bill a duty on the Government to set an air quality target by October 2022. Working with experts from Imperial College and the UK Centre for Ecology and Hydrology, as well as our two expert panels - the air quality expert group, chaired by Professor Alastair Lewis, and the committee on the medical effects of air pollutants, chaired by Professor Anna Hansell - the Government now proposes to consult on what that should be. Again, that is sensible, not least because to achieve the changes that are likely to be necessary we will all have to make quite serious alterations to how we go about our lives. It is therefore important that we are very open and clear, and have a frank public discussion, about what will be needed and the sort of sacrifices it will require.

Indeed, I have been struck by the modelling I have seen in the recent meetings I have attended with officials that has brought home just how great the challenge is: to reach just 10 micrograms per cubic metre, let alone the 5 micrograms now being recommended, it is estimated that traffic kilometres would have to be restricted by up to 50%; a total ban on solid fuel burning, including wood, would be required; and significant changes to farming practices to reduce ammonia would be needed. While many of us share the same goal, we have to be pragmatic about how quickly that is attainable and how we go about achieving it. Importantly, we need to get the public behind whatever proposals are brought forward if they are to have any realistic chance of being achievable.

That is not, though, to say that action should not be taken immediately, and I am very aware that we cannot have an endless stream of consultations on this. That is why I repeatedly called on ministers during the course of the debate to introduce right away both a policy to tackle hotspots where the damage is already clearly evidenced and a taskforce to pull together, and give direction to, the various agencies working on this:

That would also, I believe, go some way in helping to reassure the public that the can isn’t simply being kicked down the road until next October.

My full speech from Wednesday’s debate can be found here:

I received during the debate an offer to meet with the new Air Quality Minister, Jo Churchill, and I will be taking this up to press again the suggestions above. I need no persuading that this has to be an area of priority for us, with measures brought forward that adequately recognise the urgency the situation requires. That is a case I will continue to make.

Understandably, a large number of residents have contacted me following the Fixed Penalty Notices that were issued to the Prime Minister and Chancellor on 12th April.