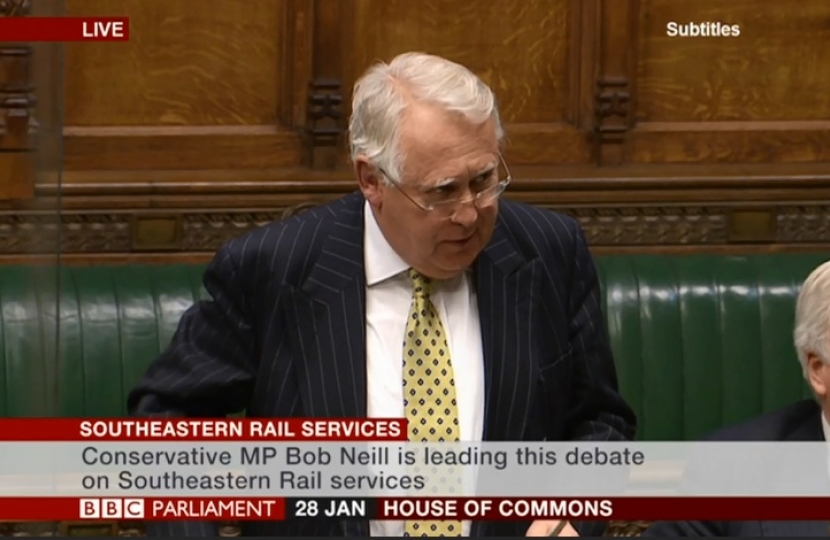 I regularly post updates on my website setting out the work I am undertaking with the Department for Transport (DfT), Southeastern and Network Rail to improve rail services in our area. As a daily commuter from Chislehurst, I share the frustration and anger of local residents at the substandard service we all too often receive, and remain determined to do everything I can to see real and meaningful changes over the coming months.

It’s become an annual trait that rail performance suffers significantly in the weeks following Christmas, and unfortunately, but unsurprisingly, the last few weeks have been no exception. Trains have been delayed due to ‘strong sunlight’; more and more people are having to stand on their journeys to and from work; and just yesterday, over 20 rush hour trains travelling from Kent to London were cancelled as a result of overrunning engineering works, with delays of 2 hours. This simply can’t go on, and earlier this month I wrote to Claire Perry, the Rail Minister, asking for an urgent meeting to discuss these problems, making the case again for the introduction of financial penalties to incentivise better performance.  A copy of the letter can be found at the bottom of the page.

This poor performance has been reflected in Transport Focus’ passenger satisfaction ratings for the autumn period, published on Wednesday, with Southeastern ranked second lowest in the country for passenger satisfaction. For value for money it scored only 35%; for its handling of delays, only 31%; and for the availability of its staff, 29%.  Indeed, an online petition calling on the DfT to strip Southeastern of the franchise has now reached almost 16,000 signatures.

I was delighted by the announcement last Thursday that the DfT and Transport for London (TfL) will establish a joint regional approach to the management of rail services, transferring responsibility for passenger rail within the Greater London boundary to TfL once current franchises are up for renewal. This is something I have campaigned for over a number of years, and I remain convinced that the opportunities presented by this announcement are vast.

In short, there will be a larger suburban fleet, with 12 car trains compared to the current 10 car maximum. Delays could be cut by up to 20%, and there will be significant investment in 68 Southeastern stations, including refurbishment, more visible staffing, better CCTV & help points, and more use of ticket gates to cut fare evasion. Rail capacity will be increased with the potential for additional interchanges, and a truly ‘turn-up-and-go’ service will be introduced, with 80% of stations having a train every 15 minutes. TfL are currently consulting on these proposals, and I would urge you to have your say before the 18 March:

However, Southeastern’s franchise is not up for renewal for another two years, and I believe it is vital that interim measures are put in place between now and the take-over of the franchise in 2018 to ensure passengers remain front and centre. My debate was an opportunity to raise this concern directly with the Minister, as well as to quote from some of the experiences local residents have contacted me about. The problems around punctuality, overcrowding, compensation and nonsensical timetabling – Grove Park being a key example – need to be addressed, and these are all issues I discussed in the debate yesterday. A full transcript can be found through the following link:

I also recently wrote an article for Politics Home on this topic, which can be found here:

As I made clear in both the article and the debate, Network Rail have a huge amount to answer for, with an estimated 70% of delays attributable to infrastructure failures. The Minister gave me some positive assurances yesterday around additional rolling stock on the metro service and reforms to compensation, agreeing to meet with me to discuss these matters further. Please be assured that I will continue to push for tangible improvements through a joined-up, cross organisation approach, and as always, I will post any updates on my website as and when they become available.