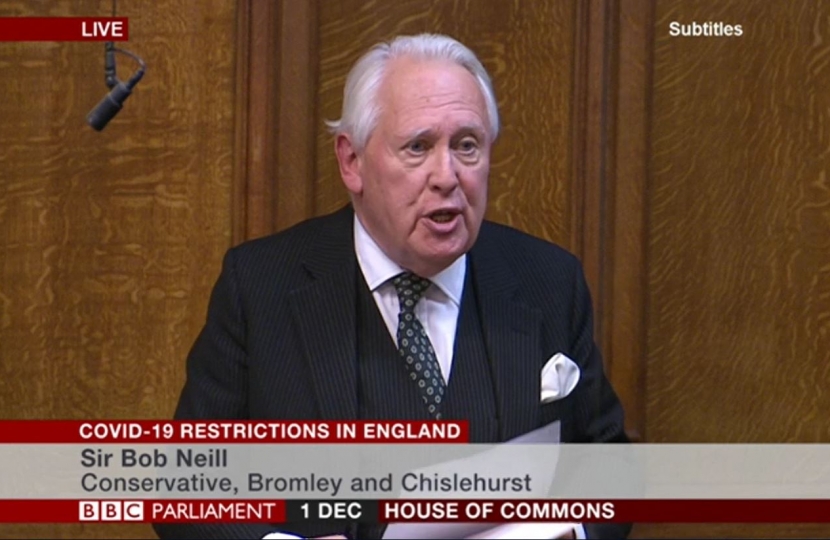 Given their considerable impact on lives and livelihoods, any restrictions to help mitigate the transmission of COVID-19 must be demonstrably necessary, proportionate and firmly supported by the evidence. I did not believe that criteria had been met before the second lockdown which is why, as I set out in this update last month, I could not support the Government in introducing it.

Having again attended numerous briefings with government ministers, as well as with its medical and scientific advisers, and having scrutinised carefully the data upon which these new tiers have been proposed, it is my belief that the restrictions remain disproportionate and still go beyond that which is justified by the evidence. That is why I voted against the Government last night. You can watch my speech from the debate here:

Everyone wants to protect the NHS and I do not underestimate the seriousness of the threat of the virus. However, that risk needs to be weighed against the non-COVID health impact of the restrictions, including through missed hospital appointments and delayed procedures, as well as the toll it has taken on the mental health of many, especially those isolated from loved ones. The huge economic cost of the restrictions, not just on those businesses that have been forced to shut, but also their supply chains and those working in them, must also be front and centre in our minds. As I have said before, we will not protect the NHS, nor allow ourselves to swiftly bounce back from the pandemic, if we wreck the economy and the tax base that funds our health service.

For a number of weeks, I and a large number of my colleagues have been pressing the Government to publish a cost-benefit analysis of the restrictions, a case I made again on BBC Politics London on the 22nd November. Impact assessments were eventually published at the weekend but were inadequate as they assessed the proposed restrictions against only one ‘counterfactual’; a hypothetical scenario in which no restrictions were imposed rather than one with a more nuanced set of interventions. That, in my judgement, would have been a much more realistic alternative. It is also disappointing that specific sectoral data, like the impact on the hospitality industry or our arts and culture sector, was omitted.

My position has been consistent in that I will support restrictions where they are targeted and based on the evidence. However, including entire regions within the same tier - when there are huge variances in infection rates, NHS resilience, and the number of those elderly or deemed clinically extremely vulnerable - needlessly damages businesses and creates more hurt for millions of families. With more localised approaches elsewhere having proven to be successful, including in Germany and South Korea, I cannot support such sweeping, broadbrush regulations without clear evidence of why that strategy, compared to other credible alternatives, is being pursued. The Government has still not adequately explained that.

Although I welcome that a number of the concerns I and others had raised have now largely been addressed, including on collective worship, the use of gyms, outdoor sport and the 10pm hospitality curfew, there remain other inconsistencies in the regulations. I am particularly concerned by the lack of guidance provided to our pubs and the hospitality sector as a whole, where again, decisions appear to have been based more on arbitrary behavioural modelling than firm medical or scientific evidence. I also believe we can continue to do more for those who have found themselves ineligible for support, including many freelancers and those working through limited companies. I have and will continue to press the Government on both issues as a matter of urgency.

The news this morning that the independent Medicines and Healthcare products Regulatory Agency has formally authorised the use of the Pfizer/BioNTech vaccine is very welcome and something we should be enormously proud of. I have every confidence in the rigour of this process and would strongly encourage everyone to get it. It is the surest way of protecting loved ones and will help us return to normality. However, the Government has made clear that it will not be made compulsory and I should stress that there are no provisions in the Public Health Act 1984 for mandatory vaccinations. In fact, it is explicitly prohibited in the legislation.

I hope the above offers a clear explanation of why I voted as I did. I will continue to post further updates over the coming weeks.