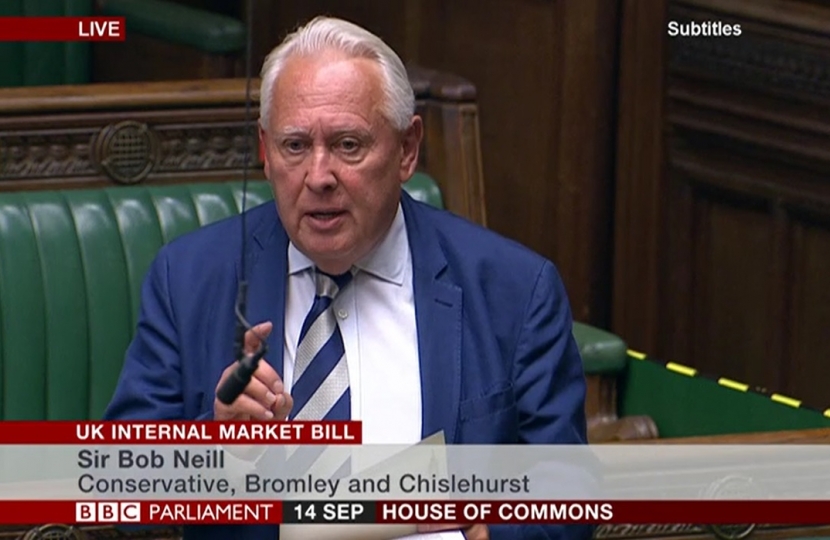 Since the vote to leave the European Union in June 2016, I have been posting updates on my website to explain my views and rationale as important Brexit votes arise. This latest looks to set out my thoughts on the Internal Market Bill, which I appreciate has been the source of much interest and concern in recent weeks.

I approach the Bill – which seeks to address fears that the integrity of the UK could be threatened by a no-deal Brexit – as someone who voted to remain in the Referendum but accepts my side lost, and as a barrister and Chair of Parliament’s Justice Committee. My position since 2016 has been clear and consistent: I want us to leave with a deal in an orderly and legal fashion having negotiated the closest possible trading links with our friends and neighbours in the EU, at the same time being able to pursue emerging opportunities in developing markets around the world. That is something I remain absolutely committed to.

Out of a total 54 clauses, 51 clauses in the Bill are proportionate, necessary and perfectly sensible, dealing with issues such as access to goods and services across the UK and the mutual recognition of professional qualifications. The remaining three, however, found in Part 5 of the Bill, raise a number of serious concerns from a legal, constitutional and political standpoint. Not only would they allow the Government to unilaterally disapply or overwrite parts of the Northern Ireland Protocol (the part of the Withdrawal Agreement which looks to ensure that goods will not need to be checked along the Irish border once the transition period ends on 31 December), but they would also put in place measures to preclude any judicial review of these sections of the Bill – an extraordinary step.

Although ministers made clear from the outset that these powers would only be used as a contingency, whether you voted leave or remain, that is cause of action that should still weigh heavily on all of us. After all, the Withdrawal Agreement is an international agreement that was negotiated by the current government less than a year ago, was supported by Parliament, and which has subsequently been registered as an international treaty with the UN. To seek to change the goalposts now would amount to a serious breach of faith and would do considerable harm to our international reputation, built over many years, as a law-abiding nation. That is a case I made in detail in articles for both Politics Home and The i Paper:

Based on the concerns I set out in these articles, which are shared by many of my colleagues - including a large number of Brexit supporters - I tabled an amendment which sought to apply a parliamentary lock to the powers the Government is giving itself in Part 5 of the Bill.

I recognise that, in the most extreme of circumstances (for example, were the level of border checks being insisted on by the EU to threaten the integrity of the UK), there could, conceivably, be a case for saying that the UK is entitled to take steps, like those proposed, to protect the Union. However, in light of the very clear process already set out in the Withdrawal Agreement to deal with problems like this through arbitration, I believe that is a very high bar which the Government must first meet and justify to Parliament.

At the Bill’s Second Reading on 14 September, I made clear that while I would not oppose the Bill at that time - as there is much good in it - I could equally not support it, and would oppose it at later stages, if left unamended. That is why I abstained.

I subsequently had a number of constructive meetings with ministers on this matter, during which the Government agreed to bring forward its own amendment, essentially adopting the spirit of mine, and publish a further policy paper that explicitly states (i) the EU must be engaged in a material breach of its obligations before these controversial powers would be used and (ii) a solution would be sought through the formal dispute settlement mechanisms set out in the Withdrawal Agreement:

Although not perfect, on the basis of that concession I agreed to support the Bill.

For some, the amendment will have not gone far enough, a concern I entirely understand. However, politics is the art of the possible. Had my amendment been drafted differently it would have not garnered the support necessary to change the Bill, I believe for the better. Indeed, without those changes we have secured, Parliament would not have been consulted at all before these extraordinary powers could be discharged. While then I still have reservations about the Bill, and hope the provisions included in it won’t be necessary, there are now at least checks and balances on this process. If such action does come to pass, MPs will be able to decide for themselves whether the Government should follow this path.

It is the job of politicians to deal with the situation as it is, not how one might want it to be, and we shouldn’t let the perfect be the enemy of the good. If the last few years have taught us anything, it is that none of us win without compromise. Had more of my colleagues, on both sides of the Commons, shown more flexibility when the previous Prime Minister’s deal was voted upon, the Internal Market Bill will have never been necessary.

The Bill passed through the House of Commons on Tuesday and I will now be watching closely its progress in the House of Lords.

Over the past week I have continued to attend regular briefings with the Council and local health officials, including from the South East London Clinical Commissioning Group (CCG), and can now update residents in more detail on the vaccination process in our area.