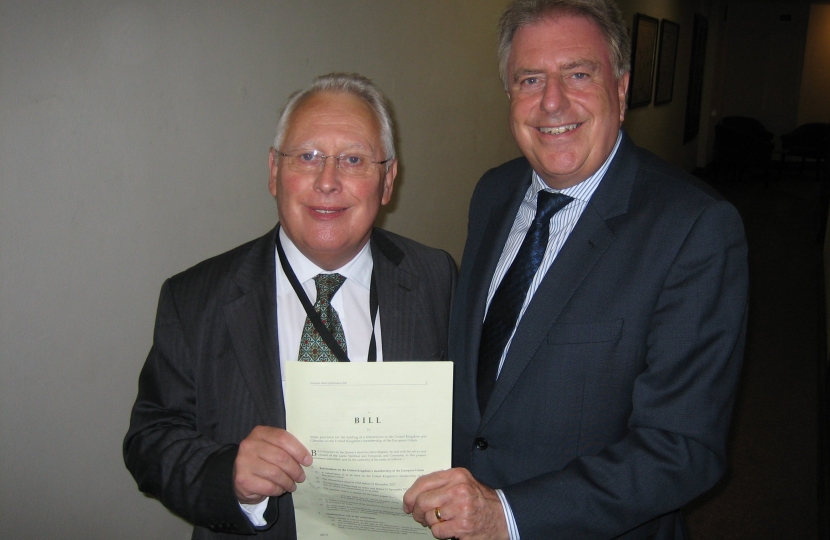 On Friday my Private Members’ Bill for an in-out referendum on our membership of the European Union had its Second Reading in the Chamber, and passed, I am pleased to say, 283 votes to 0.

The main thrust of my argument was very simple: this Bill is about choice. It is about giving the British people a long overdue say on our membership of the European Union. The economic and trading community we signed up to in 1972 is a world away from the expanding political union we are a member of today, and whether you feel we should stay or leave, it is simply wrong to deny the British people their democratic right to have a say on this issue for the first time in almost 40 years.

It is important to be clear that this Bill is not, as some will argue, a vehicle to leave the EU; nor is it put forward by Members who are inherently Eurosceptic. It is a means of giving people a voice, not an opportunity for MPs to argue over the pros and cons of leaving the Union. It is about democracy and trust, and it is about Members of Parliament – as representatives of the electorate – having faith in the people of Britain to make that decision.

I was happy to take the photo above with David Evennett, Bexleyheath and Crayford MP, shortly before the debate on Friday. He is my oldest friend in Parliament, having met him whilst at LSE together in the early 70s. It has been a nice twist of fate that we ended up representing nearby constituencies, and it is very good to be working with him on the Bill now.

The full debate, including my opening speech, can be read through the link below.