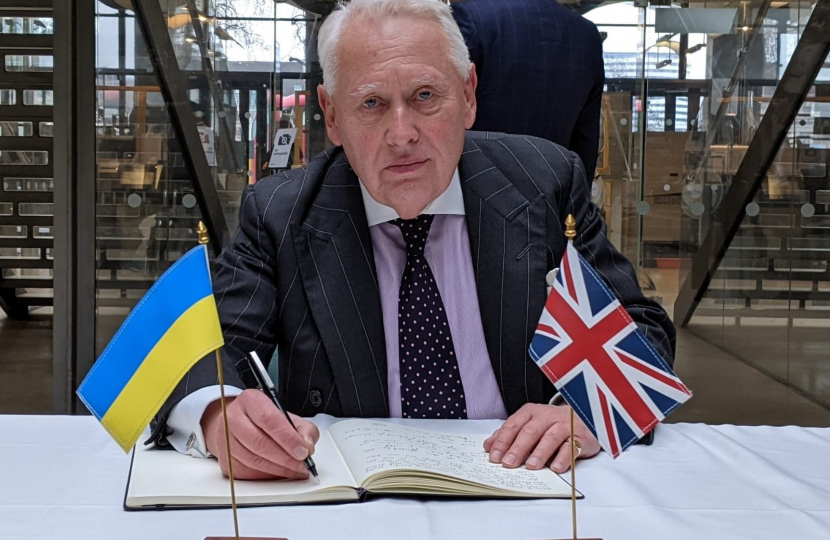 I have been horrified by the premeditated, unprovoked invasion of Ukraine. This is a war purely of Putin’s making, justified under egregious pretences and driven by a warped assertion, utterly devoid of any historical accuracy, that Ukraine is illegitimate and its people belong to a unified Slavic nation. What we are seeing is an illegal, abhorrent and indiscriminate act of aggression in which civilians are increasingly and deliberately being targeted in total disregard of international humanitarian law. These are war crimes and must be pursued as such.

Ukraine is a free, peaceful and democratic nation. It is our friend and we must stand full square behind it as it continues to courageously resist this appalling attack. While the situation remains incredibly fluid, I wanted to provide an update on the steps the UK is taking, both unilaterally and with our partners in the EU and NATO, to restore Ukraine’s sovereignty and territorial integrity and exert the maximum pressure on Putin and his cronies.

Putin has already failed in his attempt to split the West, which has imposed the most severe and coordinated package of sanctions Russia has ever faced. The list below is by no means exhaustive, but will, I hope, provide an overview of the steps we have taken to date. The UK is:

On top of this, I very much welcome that the Government has now brought forward an Economic Crime Bill to tackle illicit finance and money laundering in the UK, something many MPs, from both sides of the House, have been calling for over a number of years. As part of that, the Unexplained Wealth Order regime will be strengthened, a foreign property ownership register will be introduced, and steps will be taken to reform Companies House to make it more transparent. As I pointed out in the Chamber on Monday, we should make full use of the unparalleled expertise available in both the City and the financial and legal services sectors to ensure these new measures hit the mark:

In some of the correspondence I have received, there has been criticism of a perceived lack of action on the UK’s part, an accusation I believe unfair. The UK has been at the forefront of international efforts to first dissuade, and now isolate, President Putin, with many of the measures listed above introduced in no small part thanks to the work of our diplomats. On many fronts, we would like to go further, not least on SWIFT, and will continue to work with, and encourage, our partners - including those who have been more reluctant to act - to increasingly tighten the squeeze on Putin and degrade the Russian economy.

From a military perspective, the UK has been training Ukrainian troops since 2015 (indeed, we have trained over 22,000 members of the Ukrainian army through Operation ORBITAL) and were the first country to provide defensive weapons to Ukraine. A further package of military support is being provided and we will continue to help Ukraine defend itself. More broadly, we remain, after the US, the largest contributor to NATO, and have deployed more troops to NATO’s Enhanced Forward Presence than any other ally. We also lead the NATO Battlegroup in Estonia, where we have doubled our presence, and have deployed more British troops and equipment to eastern Europe, including additional Typhoon jets to patrol NATO airspace.

It is estimated that around 660,000 people have already been displaced by the conflict, with that number sadly set to rise considerably over the coming weeks. Our humanitarian response to those fleeing Ukraine must be as generous, flexible and compassionate as possible, something I and a number of my colleagues pressed the Prime Minister on earlier this week. You can find a copy of the letter we sent here:

I am pleased that our Ukrainian Family Scheme, for people settled in the UK who have family in Ukraine, has now been expanded to ensure that far more people are eligible. A new, uncapped humanitarian sponsorship pathway has also been announced which will allow sponsors, be they individuals, charities, businesses or community groups, to bring people to the UK. Details of how you can volunteer to be a sponsor will be set out shortly.

On the ground, capacity at the visa application centres in Poland, Moldova, Romania and Hungary, as well as in Lviv, has been significantly increased to meet demand. We have pledged £140 million in additional aid to Ukraine and 1,000 more British troops have been placed at readiness to support the humanitarian response if and when a request for help comes.

This is a very fast-moving situation and these schemes are being worked up at pace, but details of what has so far been announced can be found here. While I will be posting further updates myself as and when more is known, I would urge those impacted to keep abreast of the information on the Home Office’s website, which will be frequently updated. If you have family in Ukraine that are eligible for the Ukrainian Family Scheme, the most important step they can take is to phone the 24-hour dedicated helpline that has been set up to support those fleeing the conflict. The number is 0300 3032785. I will continue to do what I can to ensure this process is fast, seamless and welcoming and have already taken up cases directly with the Home Office.

Putin has failed to achieve the strategic realignment he had hoped. On the contrary, NATO’s resolve has only been bolstered. With our friends and partners we must continue to adopt a unified approach to this crisis, not just to halt and beat back Putin’s advances, but also to deter other would-be aggressors from contemplating similar incursions. As a number of commentators have already pointed out, it is imperative that Putin not only fails, but is seen to fail.

The Prime Minister remains in regular contact with President Zelensky and the Government has made clear that no options are off the table in terms of the support we will consider providing Ukraine. For those wanting to offer their support directly, I am told the most helpful thing you can do is donate money to help those who have been forced to flee their homes. The appeals being led by the British Read Cross and the Disasters Emergency Committee are good examples, with every pound donated to the latter matched by the Government.

The invasion of Ukraine will have a profound impact on Europe, and the world, for years to come. I continue to attend regular briefings with the Foreign, Commonwealth and Development Office, as well as the Ministry of Defence, and with colleagues met with the Ukrainian Ambassador, Vadym Prystaiko, this evening. I will post further updates over the coming weeks.

Understandably, a large number of residents have contacted me following the Fixed Penalty Notices that were issued to the Prime Minister and Chancellor on 12th April.